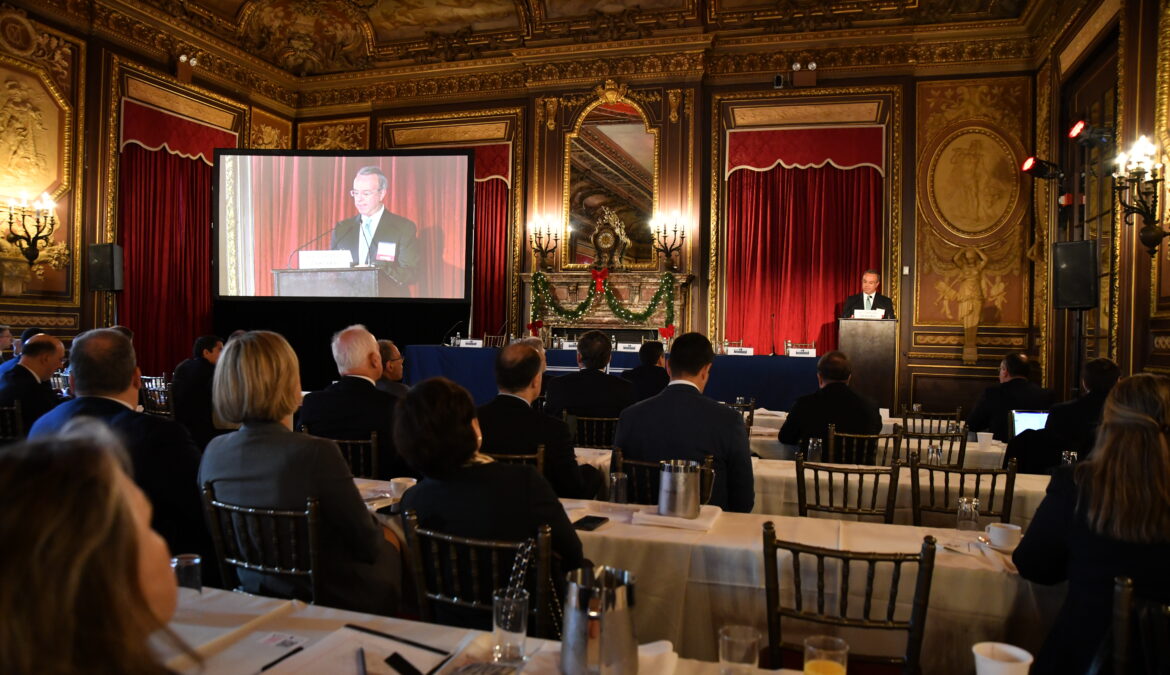 I would like to thank Mr. Bornozis for inviting me to the Annual Capital Link Forum.

A unique, prestigious event that is taking place at a crucial period, with heightened uncertainty and strong downside risks to the world economic outlook.

It is noteworthy that, according to estimates by the World Bank and the IMF, 1/3 of the countries in the global economy are estimated to present at least 2 consecutive quarters of contraction.

In these turbulent times, reinforcing the resilience and competitiveness of our economies is a major challenge.

In this field, Greece has succeeded.

2nd. GDP quality improves, by strengthening the components of investments and exports.

This year, it is estimated that Foreign Direct Investments will record a new historical performance.

According – once again – to the forecasts of the European Commission, Greece is ranked first in terms of investments’ increase for the period 2022-2024.

At the same time, Greek exports, as a percentage of GDP, are higher than those of Italy, Spain and France.

In addition, the export base is significantly diversified, registering an impressive increase in the exports of high-tech goods, which are now approaching the percentages of highly industrialized countries, such as Germany.

It is noted that, based on World Bank data, Greece had six categories of goods whose exports exceeded 1% of GDP in 2021, while before the outset of the Greek debt crisis it had only one, petroleum products.

4th. The banking sector has made marked progress.

Over the same period, deposits have increased by 35%.

This progress in restoring banks’ balance sheets gradually allows credit institutions to increase finance to the real economy, as manifested by the accelerated credit growth rate in 2021 and 2022.

We expect the primary deficit to shrink at 1.6% of GDP this year, from 5% of GDP last year.

According to the European Commission, this is the most pronounced fiscal consolidation among all EU member-states.

Moreover, the compliance gap is expected to decline even faster in 2021, when the relevant data is published.

These findings prove that our Government’s efforts to combat tax evasion, intensify controls and promote electronic transactions, combined with the significant reductions in taxes, are bearing fruits.

Indeed, the public debt to GDP ratio is projected to fall by 50 percentage points within a three-year period, the largest among all EU member-states since 2019, falling below 160% of GDP in 2023.

Markets seem to note this improvement, as Greece, according to the ESDM, was one of the few – if not the only – euro area country where credit default swaps recorded a decline over the period June to November 2022.

7th. We have completed a number of important reforms to digitalize public administration, to reorganize the pension system, to simplify the framework for investment licensing, to provide a modern corporate governance regime, to establish tax incentives in order to boost research and innovation and to increase the size of firms.

Moreover, over the last three years, Greece has recorded a notable increase in institutional performance, including government effectiveness and perceived corruption, as measured by established international metrics.

Thus, the release of the final tranche of policy-contingent debt measures marks the end of the regular Eurogroup discussions on Greece, as it was happening since June 2018.

However, at the European level, high energy price pressures, the erosion of households’ purchasing power, a weaker external environment and tighter financing conditions are taking centre stage heading into 2023.

Moreover, public debt in Greece is sustainable and in a declining trajectory, but remains high.

The country has exited the enhanced surveillance framework, but has not yet attained the investment grade status.

Non-performing loans in banks’ portfolios fell significantly, but private debt remains one of the biggest problems for households and businesses.

And we continue to navigate through turbulent international geopolitical “waters”.

Thus, it is of outmost importance to continue implementing a growth-friendly and reform-oriented economic strategy, based on 7 pillars:

1st: Implementing targeted measures to tackle the economic effects of multi-level crises, especially for the most vulnerable part of the society.

They consist of measures increasing one-off expenditure, such as electricity and natural gas subsidies to all households and businesses, social transfers to poorer parts of the society, fuel subsidies and the increase in the heating allowance to vulnerable households, as well as measures reducing – permanently – taxes, like the abolishment of the solidarity surcharge and the reduction of social security contributions.

The cost of these measures is partly offset by new taxes on windfall profits of energy producers: a cap on wholesale electricity prices whereby the electricity producers have to transfer their receipts exceeding the set cap to the General Government since July 2022, and the imposition of an extraordinary 90% levy on windfall revenues for the energy producers for the period up to June 2022.

This, along with optimal utilization of available resources, is the main “weapon” against uncertainty and volatility, as well as a roadmap to achieving investment grade status.

3rd: Enhancing liquidity in the real economy, through the deployment of the Public Investment Budget and the full and timely implementation of the Recovery and Resilience Plan.

Indeed, PIB spending will rise to record levels in 2023, and the amount that our country currently receives from the RRF exceeds 11 billion euros.

4th: Implementing ambitious structural reforms, including the primary health care reform, the codification of the labor legislation, the de-investment of the state from the banking sector, as well as the implementation of the Asset Development Plan.

5th. Implementing the new insolvency framework which is state-of-the-art.

We have achieved a growing amount of successful debt settlements through its out-of-court workout platform, and increasing acceptances by debtors.

Additionally, we legislated the establishment of a Public Credit Bureau and of a Central Credit Registry, as well as the implementation of a National Strategy for Private Debt Management, in order to prevent future private debt build-up and enhance the secondary NPL market.

The responsibility of financial institutions, on that field, is significant.

This should be taken, on the principal of burden sharing.

Moreover, as Ministry of Finance, we have been systematically integrating the climate aspect into our economic policies.

As a result, the 2023 State Budget features explicit green tagging references on the climate footprint of state budget spending.

Indeed, we have recently introduced an additional 100% super-deduction for tax purposes of qualifying SME expenses for green transition and digitization investments.

7th. Actively participating in the initiatives for the new European economic architecture.

We support the completion of the Banking Union, the deepening of the Capital Markets Union and the review of the economic governance framework.

As far as the latter is concerned, given the increase in public debt ratios over the last couple of years, a reinstatement of the present fiscal rules makes little economic sense and would not be credible with markets.

The revised fiscal framework should ensure, among others, that:

As I mentioned on Tuesday, during the ECOFIN meeting, the European Commission’s proposal is a suitable basis for further discussion.

We share the communication’s assessment that fiscal sustainability and long-term growth are inseparable.

We also understand the case for strengthening the link between fiscal and external sustainability.

And we agree with the intellectual basis for the “contract-type” approach, which increases national ownership and, therefore, the scope of compliance.

At the same time, the communication leaves some important gaps in the governance framework.

1st. The economic basis for introducing into a monetary union a centralized fiscal capacity is very strong.

2nd. The communication is somewhat unclear about the treatment of asymmetric external imbalances.

3rd. There is no provision for the treatment of upsides relative to the projected fiscal path.

4th. We have a serious concern with the proposal for automatic opening of Excessive Deficit Procedure in the event of deviations from the agreed fiscal path for member-states classified to have high debt challenges.

It is evident that, despite difficulties and international volatility, Greece has turned a page.

The country is efficiently implementing reforms and coherent policies which provide the impetus to form a more resilient and inclusive economic landscape, achieving high and sustainable growth, creating many jobs and enhancing social cohesion.

We are determined to continue along the same path! 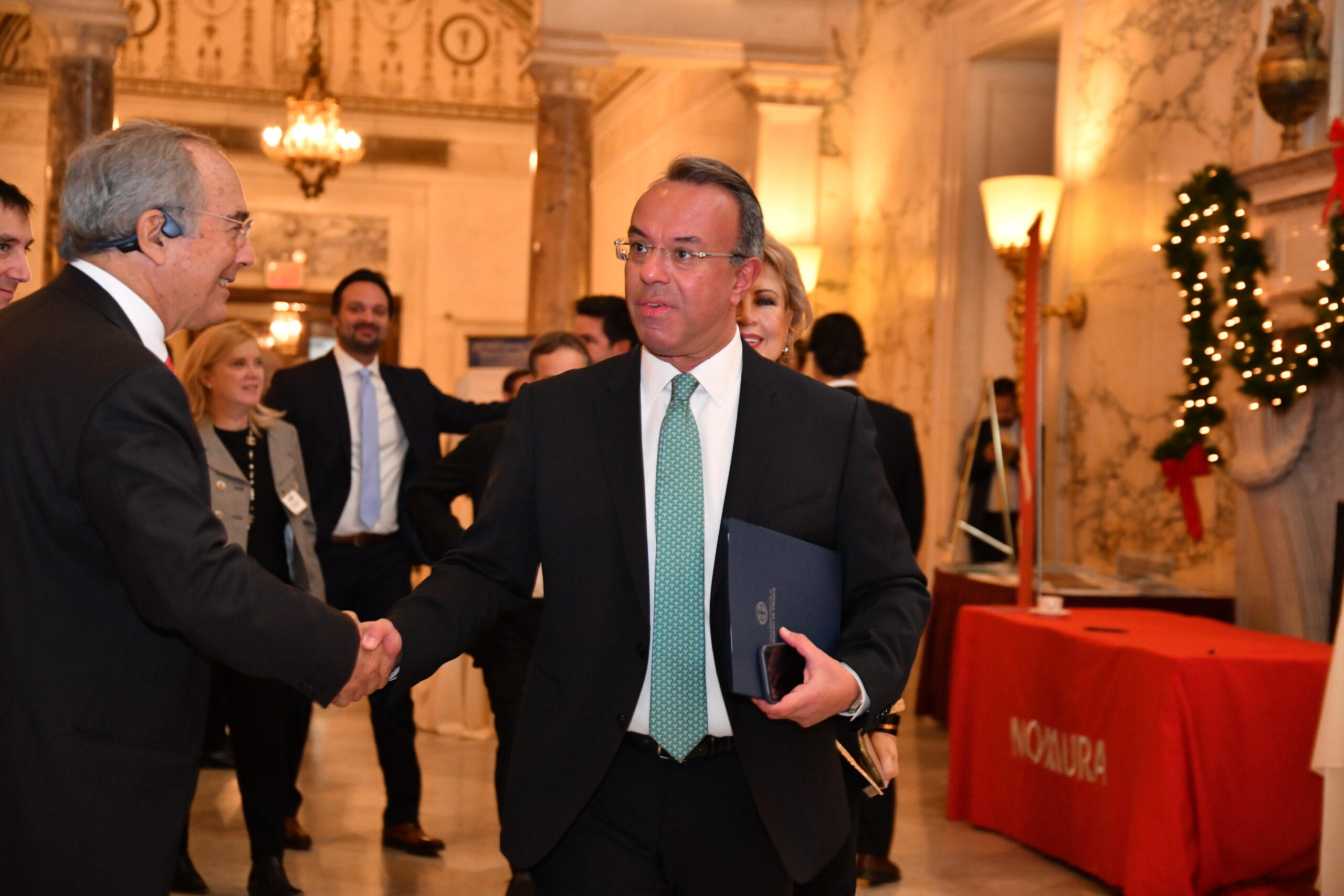 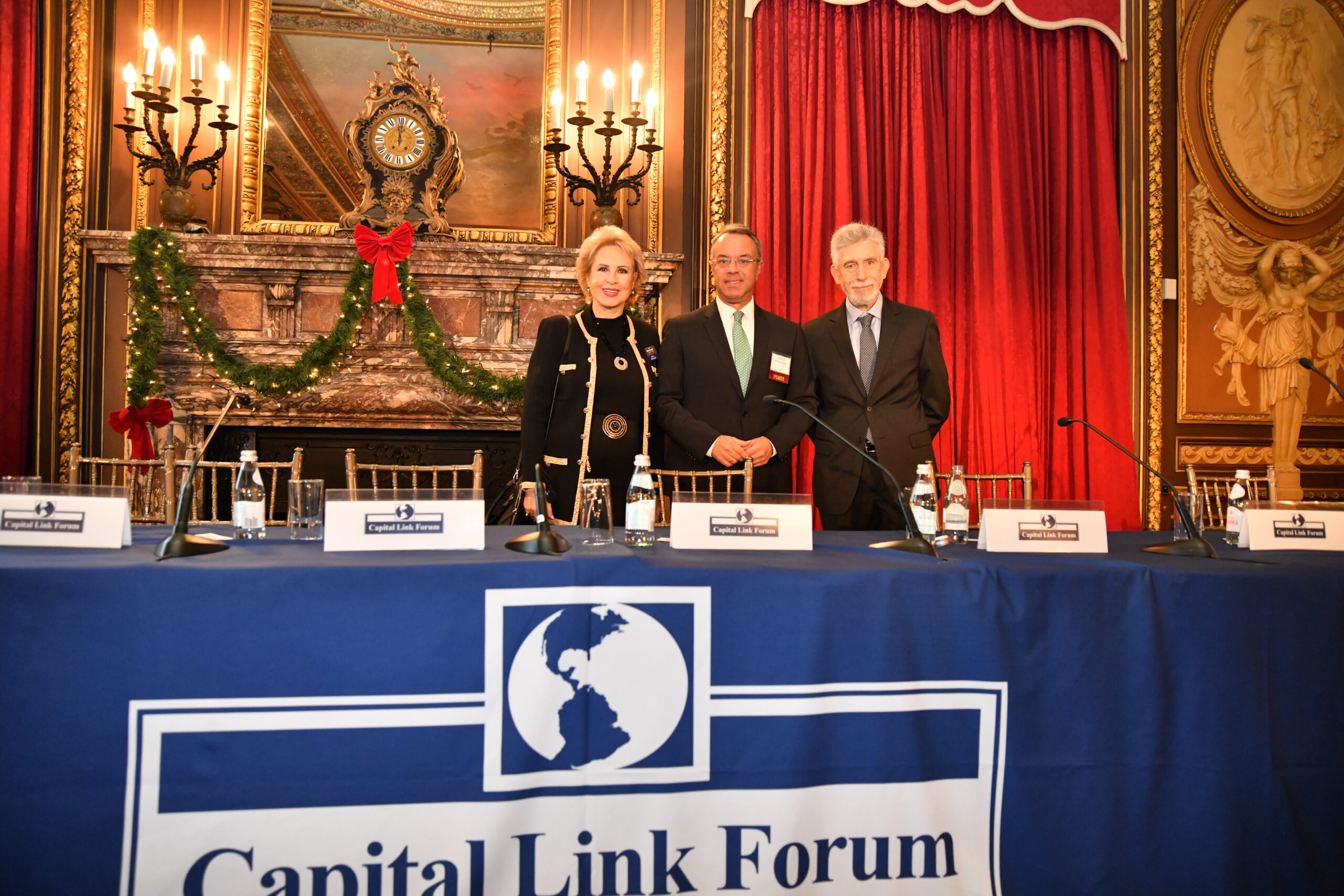 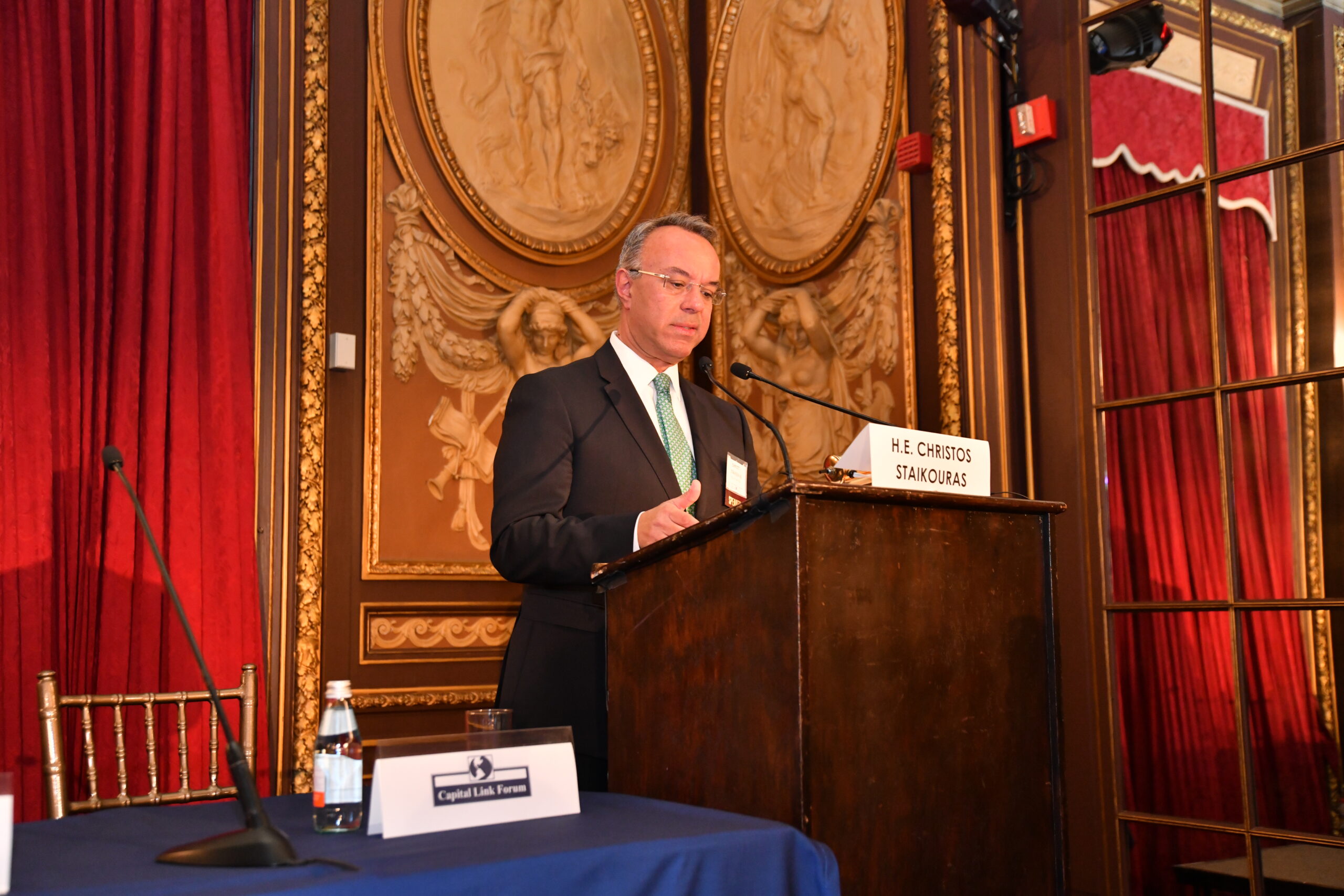 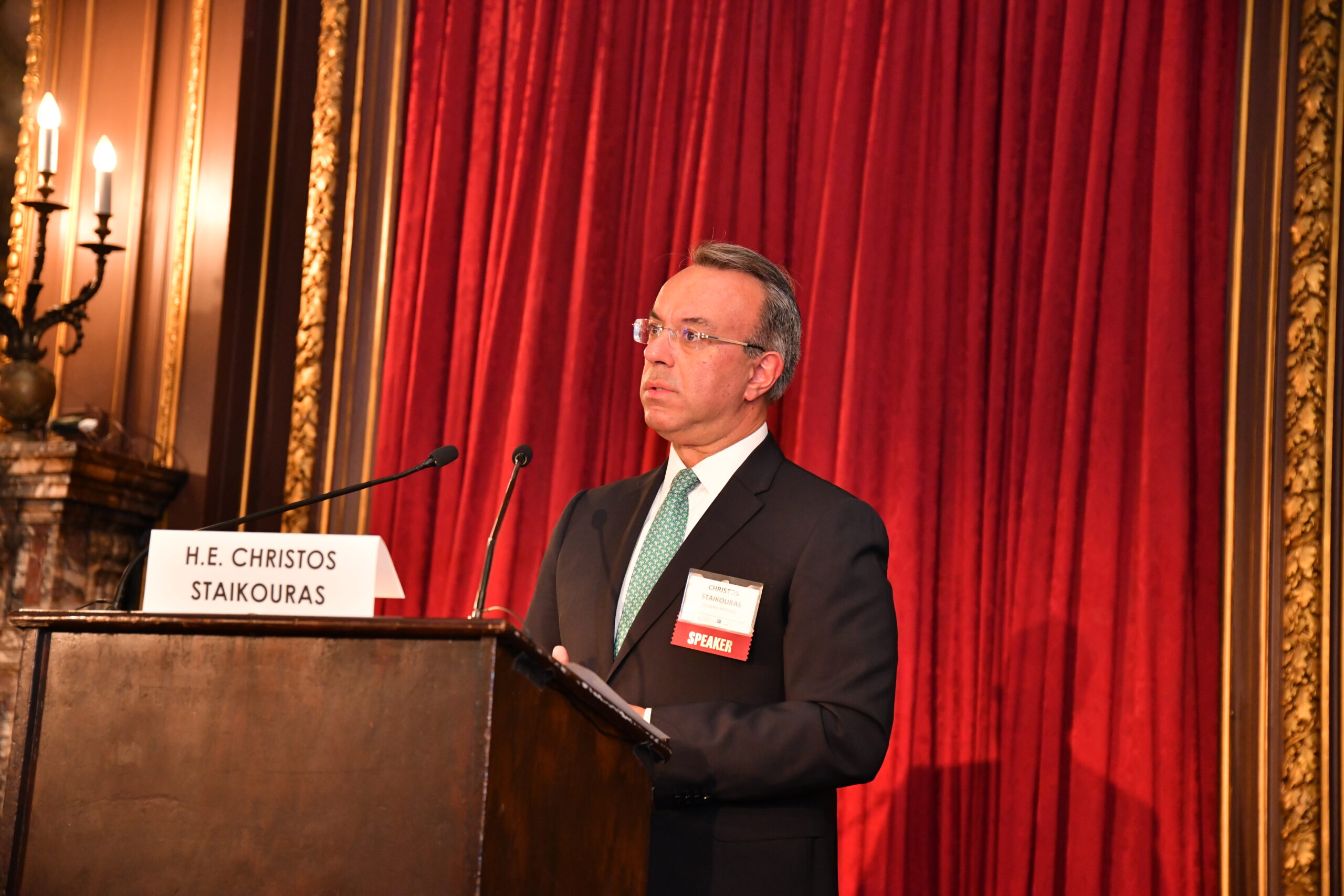 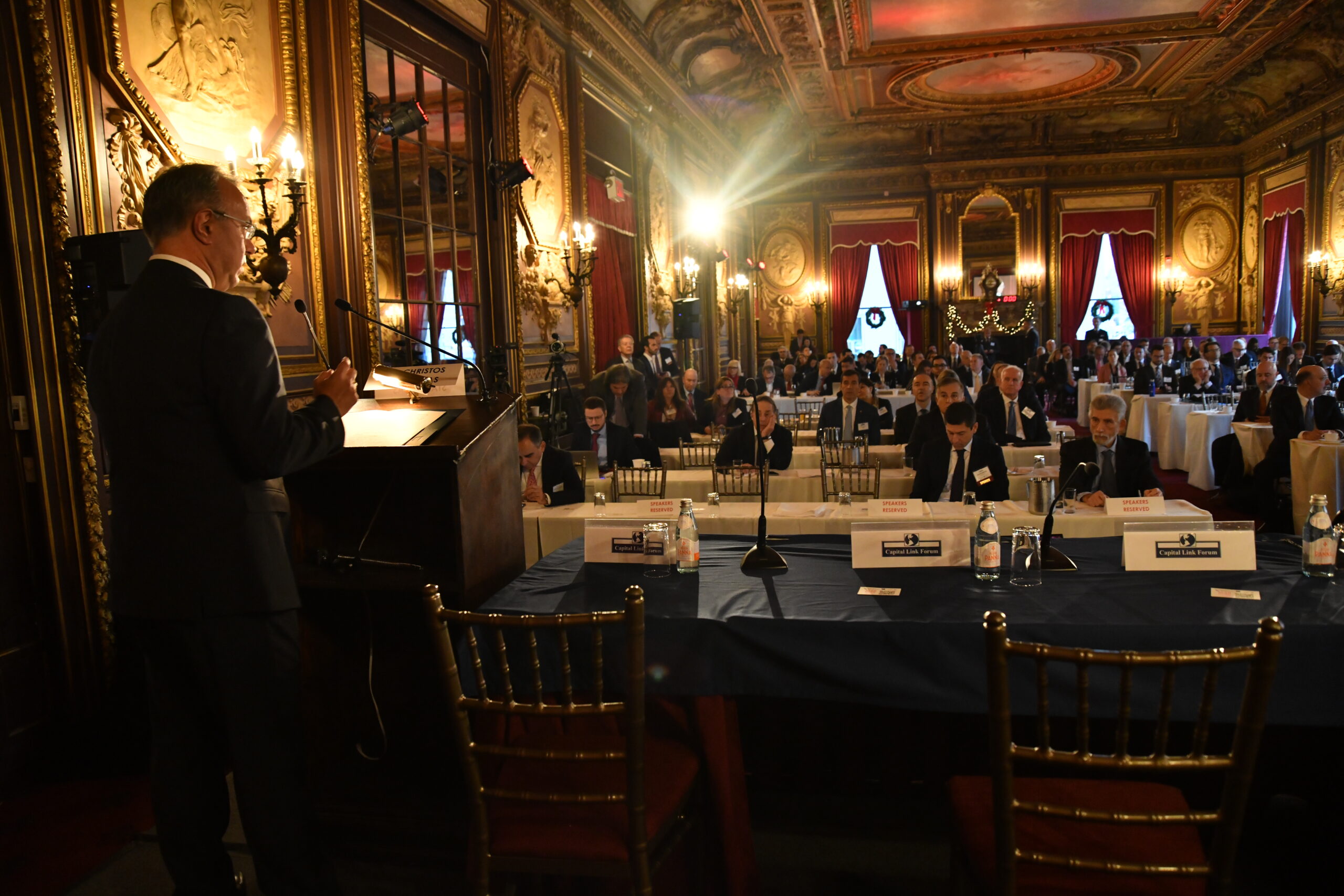 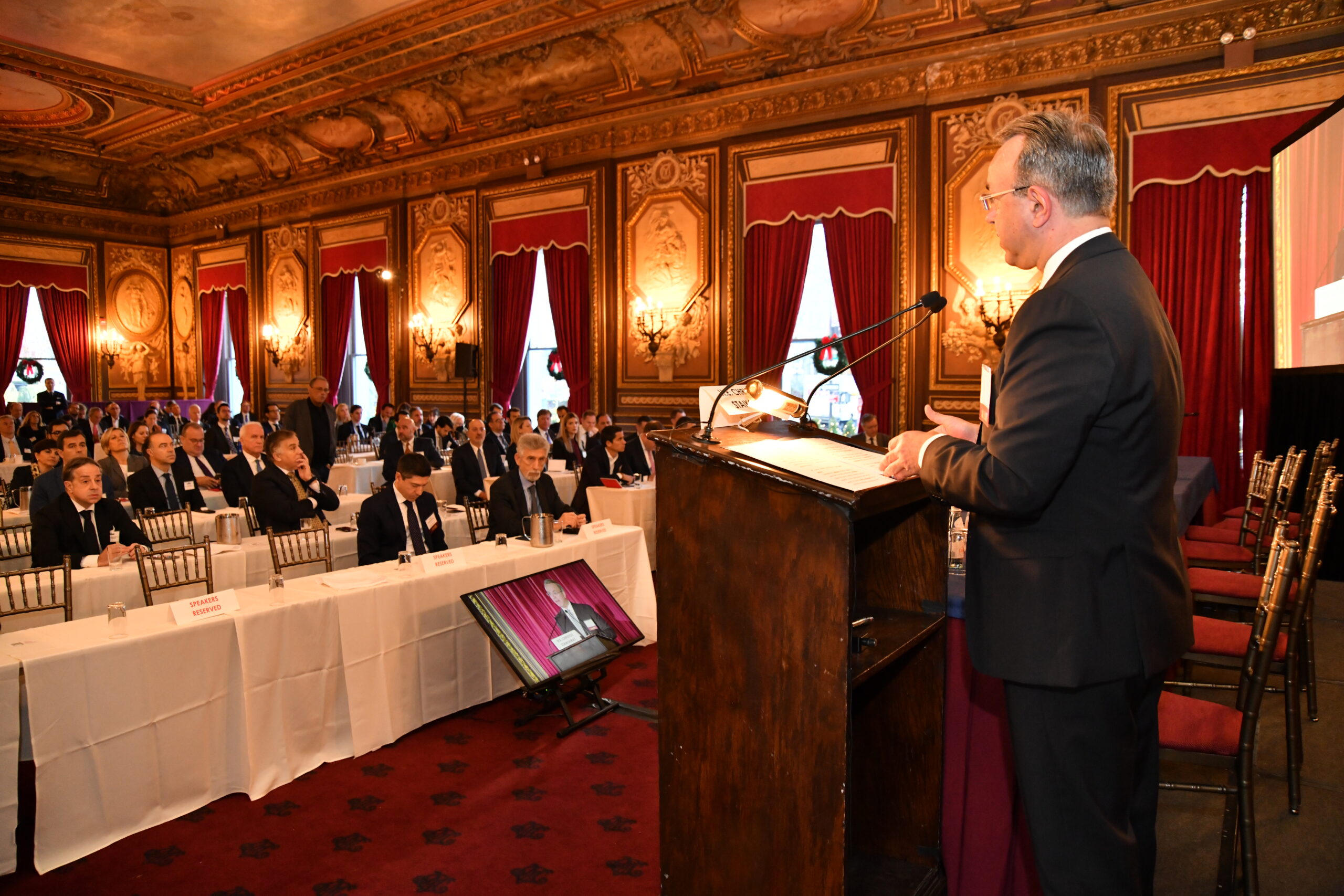 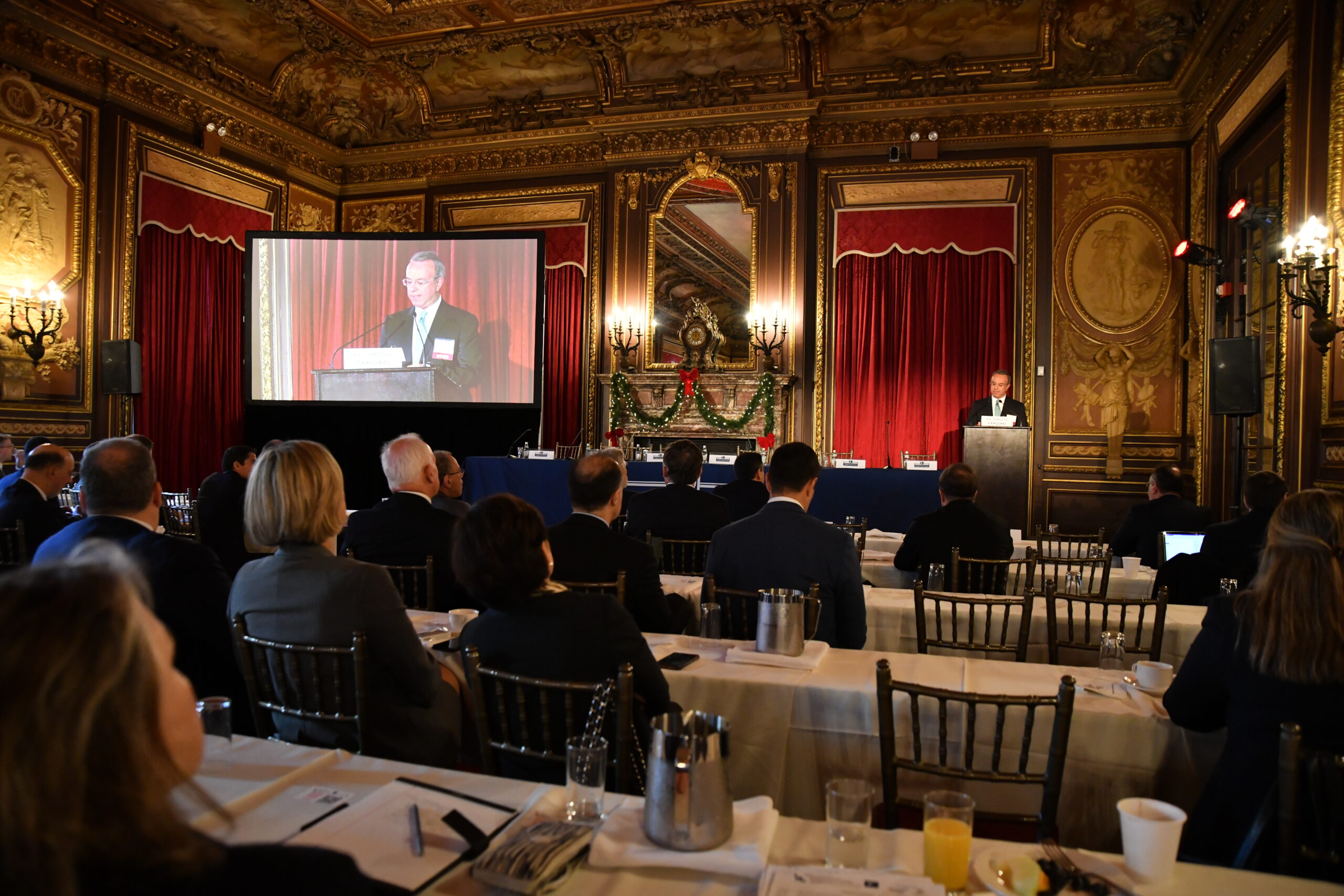 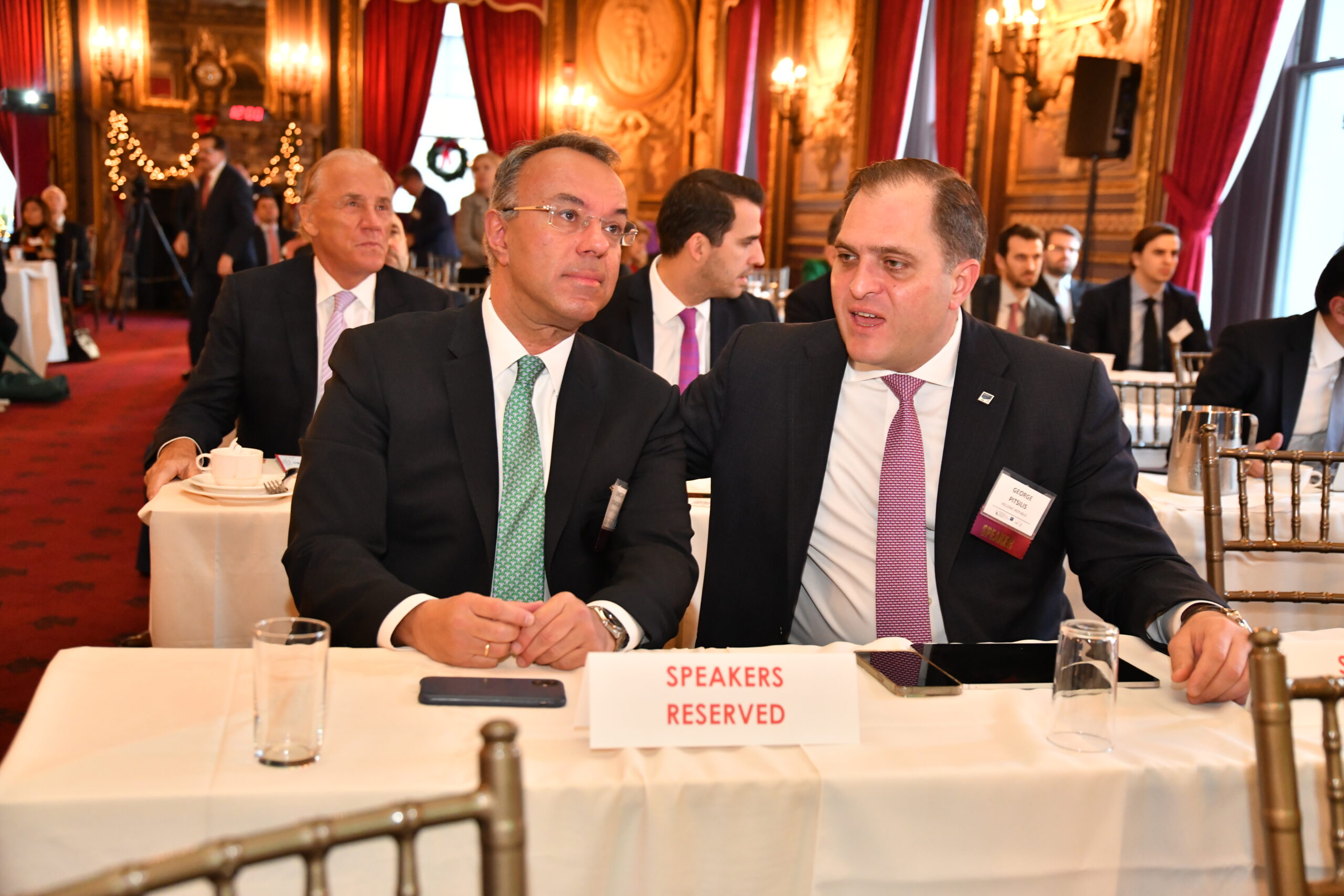 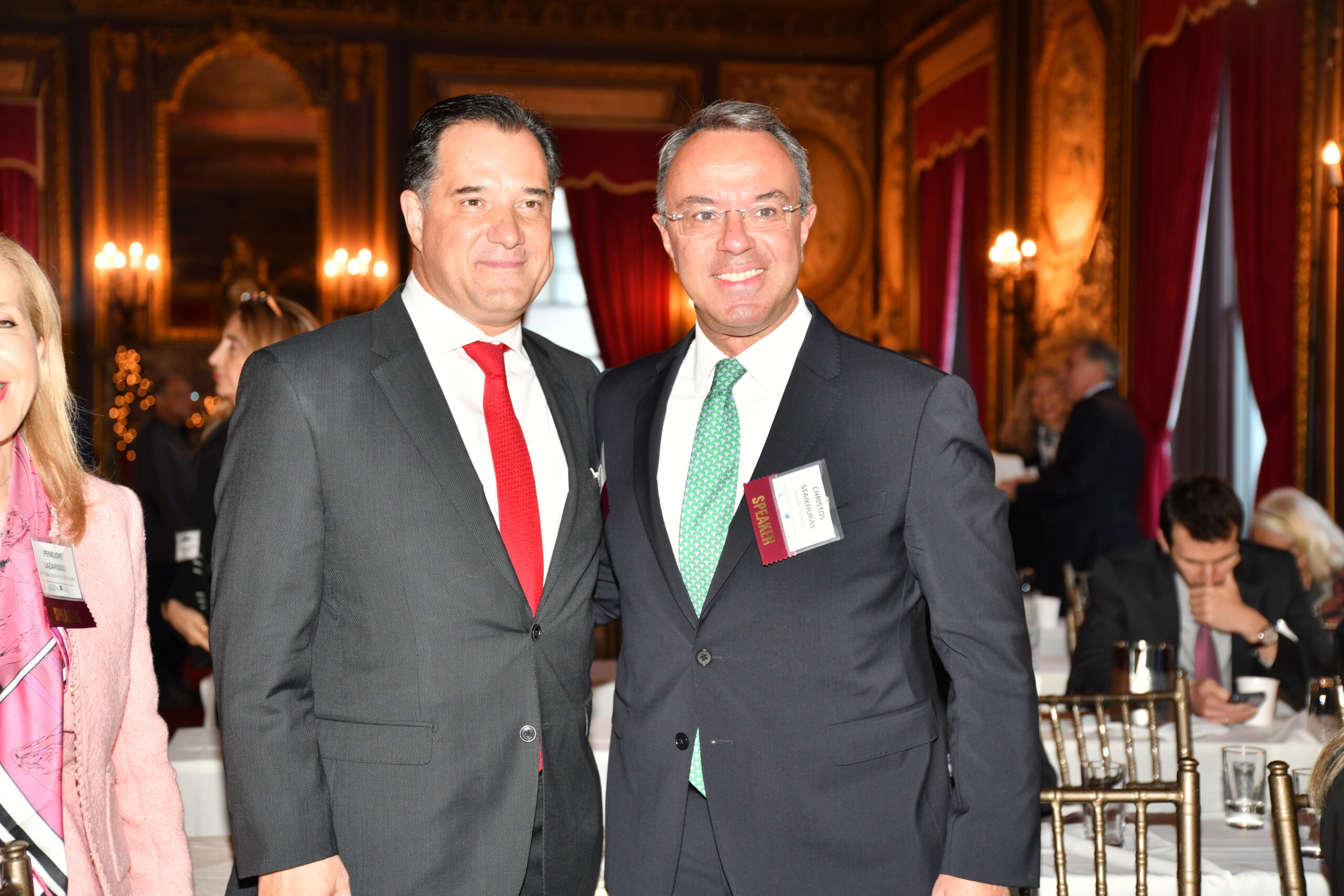