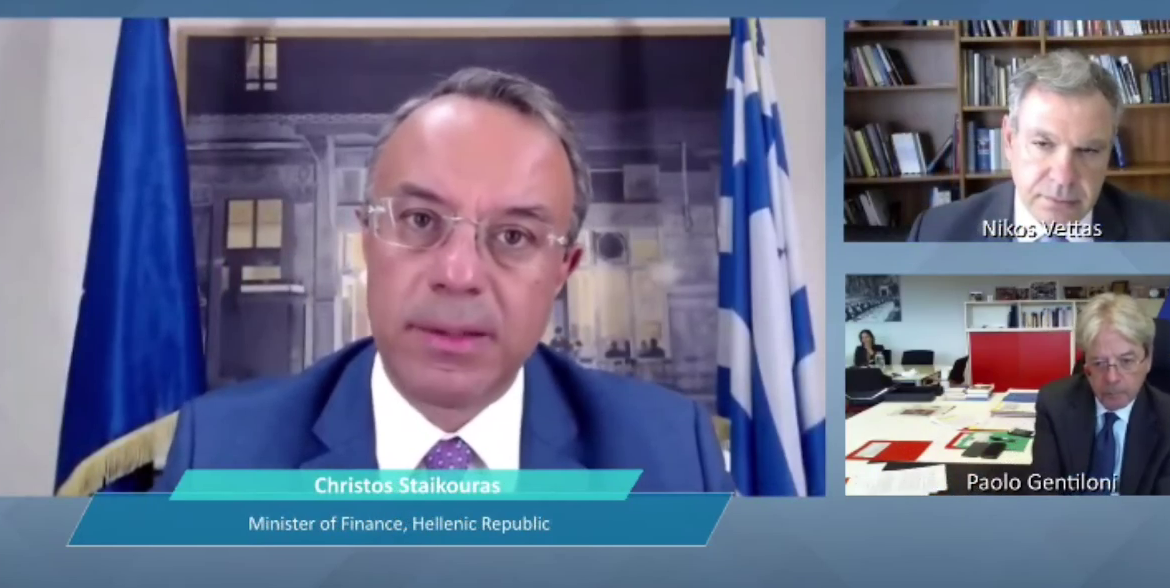 First of all, I would like to thank the organizers – the European Commission and the Foundation for Economic and Industrial Research – for their kind invitation and for offering me the opportunity to share the digital floor with Commissioner Gentiloni and discuss on an extremely interesting and important topic.

For more than a year and a half, the European and global economies have been facing an unprecedented, multidimensional crisis due to the COVID-19 pandemic.

A crisis which caused a great deal of uncertainty and has had a great impact on fiscal policy and fiscal priorities in every European country.

Europe had to tackle this severe crisis and its social and economic consequences rapidly, methodically and in a spirit of solidarity.

Thankfully, Europe’s response did have these characteristics.

Important decisions were taken, including the activation or/and the enhancement of pre-existing measures to respond to the highly challenging circumstances.

Just to pick up some of the important decisions taken at the EU level:

And, of course, the Next Generation EU, with its major pillars, such as the Recovery and Resilience Facility (RFF), the REACT-EU, and the Just Transition Fund, was created.

If we add the total amount available through the aforementioned “safety net” and Next Generation EU, a total firepower of 1.3 trillion euros – more than the Multiannual Financial Framework (MFF) for the period 2021-2027 – is available to support our economies and to lead to a strong and resilient recovery.

At the same time, the MFF itself, also, offers us a vast amount of funds to implement policies and structural reforms that will form the basis for strong, sustainable, clever and inclusive growth.

Available data and a series of indices point out that – thanks to all the above – Europe is recovering faster than expected.

According to the European Commission’s Summer Economic Forecast, “the volume of output is projected to return to its pre-crisis level (2019-Q4) in the last quarter of 2021, which is one quarter earlier than expected in the Spring Forecast for the euro area.”

Since early July, when the Summer Forecast was published, more positive data and even more optimistic estimates have come out, suggesting that the European economy will rebound strongly this year. The same goes for Greece.

However, can we just rely on this?

The answer is, “definitely not”.

We have to continue and strengthen our efforts towards safeguarding a strong and resilient recovery, which will pave the way for high, sustainable, and inclusive growth.

To that end, as the successful handling of the coronavirus crisis has shown, policy co-ordination among EU member states is of vital importance.

And EU economic governance plays a key-role in achieving this goal.

It is within this scope that we have to reform the Stability and Growth Pact, along with achieving substantial progress towards the completion of the Banking Union.

I will elaborate more on these aspects, starting with the fiscal surveillance framework.

First, and as far as the immediate future is concerned, I would like to recall the Eurogroup statement of March 2021, according to which “the Eurogroup is committed to a supportive stance in the euro area in 2021 and in 2022, also taking into account the fiscal stimulus stemming from the RRF.”

And a couple of days ago, the President of the Eurogroup Paschal Donohoe stated that “there will be no premature withdrawal of Euro-based fiscal support.”

We fully support this approach.

The continuation of appropriate fiscal support and the necessary preparation for a soft landing, from fiscal relaxation to the gradual and careful return to fiscal rules, targets and requirements, will serve fiscal prudence, while sustaining the ongoing recovery, allowing member states to effectively address remaining challenges caused by the pandemic.

However, we also have to respond to other potential challenges, lying further ahead.

This is why I firmly believe that the discussion on the economic governance review will be crucial to shape the future of the European economy and our national economies on a solid, more resilient and sustainable basis, taking into account lessons from the current and previous crises.

The starting point for this discussion is that fiscal sustainability is definitely a cornerstone for sustainable growth.

Thus, it has to be safeguarded in the medium-term.

In this context, the central question we need to answer is this: do the current rules included in the fiscal surveillance framework, i.e., the Stability and Growth Pact, serve our goals in the most efficient way, given that the present economic environment is very different compared to the one within which these rules were formed?

I think that the calibration of fiscal rules and their mechanics can and should be reviewed in light of events and evolving priorities, precisely to help us achieve the full set of our policy goals.

And here, I think, we need to strike the right balance.

Of course, through our decisions, we should signal that our fiscal policies are in line with long-term binding fiscal constraints, otherwise markets will react.

But, on the other hand, we must also bear in mind that, in light of the significant increases observed in debt to GDP ratios as a result of the pandemic, an adverse market reaction can also follow if markets think that we are overambitious regarding our chosen path for fiscal normalisation.

As a result, in forthcoming discussions regarding the European fiscal framework, we should reiterate our commitment to medium-term fiscal sustainability; and discuss, with an open mind, based on a pragmatic and evidence-based approach, what is the best course to achieve it, in a way that combines the optimal speed of fiscal adjustment along with the required safeguarding of fiscal credibility and sustainability.

Furthermore, we should ensure maximum capacity of achieving output smoothing during episodes of future business cycle down-swings, for example, through protecting public investment.

Last, but not least, when deciding about the main features of our fiscal surveillance framework, we should be mindful of its links with the single monetary policy and the financial sector.

Fiscal policy is a key, but not the only, part of the overall policy mix, whose ultimate objective is to deliver sustainable, higher and inclusive growth.

When debating about fiscal rules, we should have in mind this bigger picture, recognize spillovers among the individual components of the overall policy mix, and be able to see the wood for the trees, if you will allow me to use such non-technical language.

In this context, properly calibrated amendments to existing fiscal surveillance framework should be explored and perhaps be justified.

Greece, as always, will actively and responsibly participate in the forthcoming dialogue, contributing to the discussion with well-crafted, technically sound and credible positions, playing, as always, a constructive role in the debate.

All the above cannot be seen separately from the ongoing procedure to complete the Banking Union.

Greece places great emphasis on making progress with the Banking Union and has kept a constructive stance throughout ongoing discussions.

We believe that the European Deposit Insurance Scheme (EDIS) is the main element of the Banking Union architecture that is still totally missing, as well as the central element around which the entire discussion on Banking Union developed in the first place.

We believe that it is really crucial to have a timeline for the establishment of EDIS as the third pillar of the Banking Union, and a clear understanding that liquidity support schemes will be a transitory phase, followed by a transition to a fully-fledged EDIS.

We also look forward to achieving significant progress in the field of Capital Markets Union. This has high potential to promote higher and inclusive long-term growth.

In this context, we believe that the introduction of a European safe asset will make a very significant contribution and will also facilitate progress in the field of Banking Union.

One more critical field in which Europe should seek to make further progress is successfully tackling poverty and inequality.

As to the levers that could be used at national level, I will mention five points:

1st. A shift of taxation away from labour, towards other sources.

This should be done in a fiscally neutral manner.

2nd. Additional measures to increase participation in the labour force, especially among groups that are under-represented, like women, migrants and youth.

3rd. Important reforms in education which should increase the quality of the educational services provided and lead to a better alignment with the needs of the labour market.

Moreover, upgrading the skills of the population may help close the digital divide, which is going to be the primary force driving inequality.

4th. Welfare policy, not only ensuring that the social safety net is strong and wide enough, but also providing the right incentives and preventing poverty traps that would perpetuate an unequal distribution of income.

5th. Expanding the tax base will be instrumental for creating an inclusive and resilient economy and society.

But this is an area in which we can also consider initiatives at the Union level.

For example, we could explore ways of introducing a central fiscal stabilization capacity.

This, if properly designed and calibrated, could entail significant risk-sharing benefits for all member-states, and the Union as a whole, cushioning the impact of downturns on economic activity and employment.

As the experience of this crisis and previous ones has shown, such a mechanism would particularly benefit the more vulnerable sections of our societies, thus making an important contribution towards limiting inequalities and poverty.

The widely acknowledged success of the SURE programme in achieving these objectives during the present crisis justifies the validity of this proposal.

I am convinced that all my European colleagues and all the European Governments stand ready to further cooperate, in order to ensure strong recovery and to bring out Europe as a power of peace, democracy, growth and social cohesion.

A power which was created step by step, on the basis of solidarity.

In these challenging times, it is our duty to remain united and to provide a bright and promising future for our children.

It is our duty.

And we can make it!