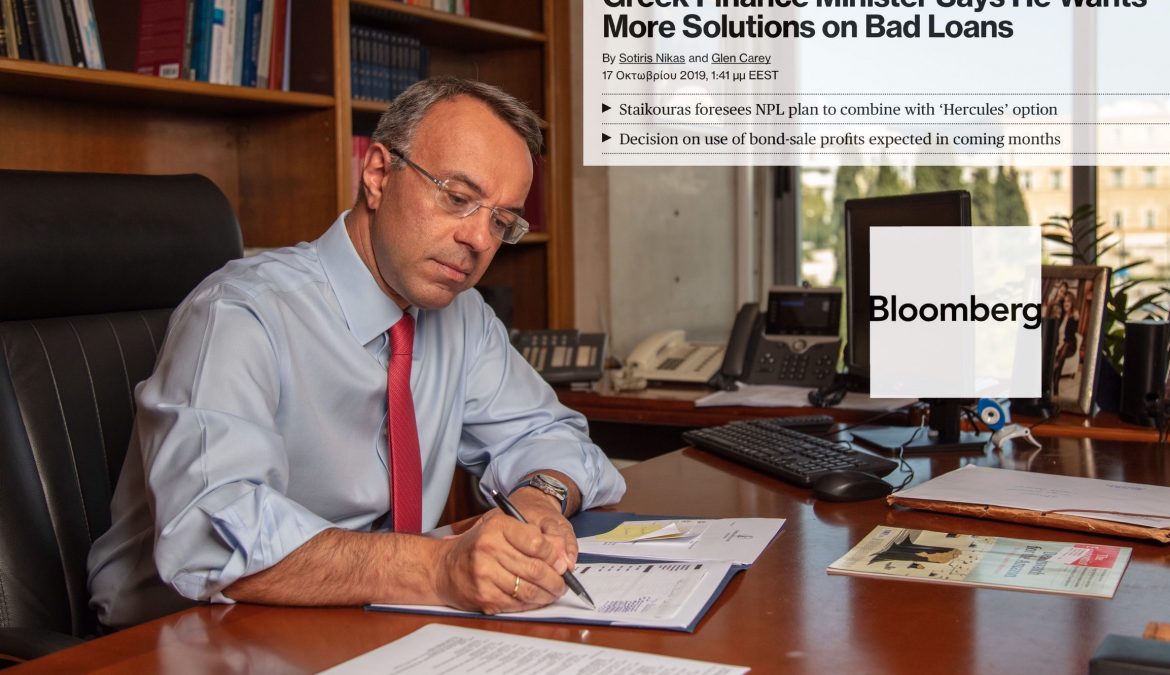 (Bloomberg) — Greece wants to shore up its banking sector by helping lenders shed more bad loans and it’s working on a new solution to combine with the European Commission-approved Hercules program, the country’s finance minister said.
“We are open and already seeking other realistic, innovative and efficient systematic solutions” in addition to the Hercules choice for reducing non-performing loans, Finance Minister Christos Staikouras said in an interview. “Greece will eventually approach single-digit NPL ratios.”
Greece’s non-performing loan ratio totaled 39.2% at the end of June, by far the highest in the euro area. The so-called Hercules option foresees the use of as much as 9 billion euros ($10 billion) of state guarantees to help Greek banks cut their 30 billion euros of NPLs.
The lenders, including Piraeus Bank SA, Eurobank Ergasias SA, Alpha Bank AE and National Bank of Greece SA, are under pressure to eliminate bad loans from their books and start injecting credit into the economy. They will have to cut NPLs by some 50 billion euros by the end of 2021 to meet regulatory targets.
Bond Profits

The government and its European creditors are discussing whether the country can use proceeds from Greek bonds that central banks bought during the crisis — under the Securities Market Program (SMP) and the Agreement on Net Financial Assets (ANFA) — for investment rather than for debt repayments.
“A key priority for Greek macroeconomic policy is the upgrade of the supply side of the Greek economy,” Staikouras said in the interview. Pre-crisis, fixed capital investments stood at 20.6% of gross domestic product and the government now projects that in 2020 the figure will be 13.1% of GDP.
“Our macro-policy strategy is an increase in the level of fixed capital formation,” Staikouras said. Greece and its partners should explore any avenue that will lead to a positive investment shock, the finance minister said.
“We are discussing with institutions specific investment fields, taking into account the Eurogroup decision,” Staikouras said. “Conditions are maturing. Decisions are expected in the following months.”

Greece’s European partners recognize that there is currently no fiscal gap for either the 2019 or 2020 budget, the minister said. That means creditors agree that the government can meet targets for a primary surplus of 3.5% of GDP with the policies included in its draft budget for next year.
The next step for the government: secure lower primary surplus targets for 2021 and beyond. Discussion on this issue could start when the Commission updates its debt sustainability analysis for Greece, most likely in November.
The new analysis will include Greece’s reduced borrowing costs — after it joined the group of countries being paid to borrow money on debt markets — and new growth projections.
“Higher growth rates along with lower funding rates will improve debt sustainability, allowing for gradual reduction of fiscal targets,” Staikouras said.
Early repayment of part of the International Monetary Fund’s 2.9 billion euros in loans to the country could help Greece reduce its debt-servicing obligations; the repayment has already been pre-funded through 2019 bond sales.
“Other repayment operations could be contemplated to reduce the IMF’s share in Greece’s total debt to a minimum level,” Staikouras said, noting that this isn’t currently a priority.
The minister is in Washington and will talk to officials and investors on the sidelines of IMF meetings.